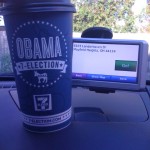 I do not own a flag pin. I have one hand held flag that I waved at the Obama inauguration. I am often suspicious of rah-rah displays of patriotism. Nothing wrong with it but it is just not my style. My love of country may be silent but it runs deep. A powerful rendition of the National Anthem still moves me (Whitney Houston) and I don’t ever remember not having a lump in my throat when the anthem is played after an American wins a gold medal.
There is nothing more important to American democracy than voting. If every American voted, this race would not even be close. But American democracy is ruled by those who show up. I am tired of hearing people lament politics and politicians. If you know of a better political system than the one we have, then bring it on. Every time you bash our political system, you are really the anti-American. Every time you don’t vote, you are the one endorsing the dictatorship of the voting few. I would argue that those who fight for what they believe in, that put their sweat and tears into this system, are the true American patriots and no party has a monopoly on that. The Obama and Romney supporters out in the field right now are my American heroes. I disagree with half of them but I also salute them.
Which brings me to Ohio. In two weeks the Presidential election will be over. The polls show the race to be virtually tied and most prognosticators are saying that the candidate that wins Ohio will most likely win the Presidency. Hence, I write this while sitting in Ohio.
If you know me, you already know I am here to work for President Obama. His policies, his values and his choices on where to take our country are far and away more in line with my political views. I suspect that 98% of you reading this have already made up your minds on who you will vote for on Nov 6th. I respect your point of view and encourage you to exercise that vote. For the 2% still unsure, call or write me, we need to talk.
I hope to do regular updates on my time in Ohio but as Election Day gets nearer I suspect these updates will be fewer. Democracy is not a spectator sport. I hope to see you on the playing field.